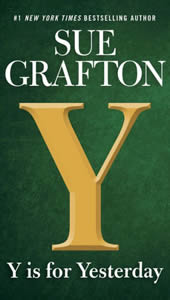 “I’m going to miss Kinsey Millhone. Ever since the first of Sue Grafton’s Alphabet mysteries, A Is For Alibi, came out in 1982, Kinsey has been a good friend and the very model of an independent woman, a gutsy Californian P.I. rocking a traditional man’s job...it’s Kinsey herself who keeps this series so warm and welcoming. She’s smart, she’s resourceful, and she’s tough enough to be sensitive on the right occasions.” New York Times Book Review

“The consistent quality and skillful innovations in this alphabet series justify all the praise these books have received over the past 35 years.” Wall Street Journal

“This will leave readers both relishing another masterful entry and ruing the near-end of this series. Prime Grafton.” Booklist (starred review)

“Grafton once again proves herself a superb storyteller.” Publishers Weekly

“The series may be coming to a close, but Grafton constructs an intricate plot following two time lines with at least a dozen characters in play while rarely slowing the pace.” Library Journal

“The lively, engrossing...Grafton is in sure command of Kinsey’s wise-cracking but warm voice and of a many-layered plot that moves back and forth over events of a decade. Y Is For Yesterday might make you wish the alphabet had a few more letters.” Tampa Bay Times-Review